Thanks to Emergency Medicine Literature of Note for directing me to a new article. It's a great blog, and Dr. Radecki makes it easy to feel current, and in bite-sized posts!

One of his recent posts reviewed the new study "Agreement between emergency medical services and expert blood pressure measurements." It's an interesting study to read, and it must have been fun for the research assistants (RAs).

The methodology was pretty elegant. In case you didn't read the abstract above, I'll hit the high points. The researchers wanted to assess the accuracy of BPs obtained by paramedics.

In Phase I of the study, the RAs took blood pressures on EMS-transported patients just after they arrived in the ED, and compared those measurements with the last BP obtained in the field. In Phase II, they actually rode on the rigs, and took BP measurements simultaneously with the paramedics. Additionally, the RAs interviewed the medics about their measurement technique (phase I) and observed their techniques in the field (phase II).

Now, they used as the criterion of blood pressure measurement technique a document published by the AHA in 1993. It lays put exactly how wide the cuff should be, which of the 5 sounds should be used for measurement, and so on - pretty standard stuff. Of course, on a daily basis in the ED, most of it is observed only in the breach! For example, take this passage:

You can fill in here your own mental picture of the conditions under which most BPs are obtained in the field. Obviously, any prehospital BP measurements will far fall short of these "gold-standard" conditions, but it does make for amusing reading. Most of the BPs obtained in rooms 4 and 5 in my ED would not meet this high standard, I'm afraid.

The Phase I and Phase II results are summarized/combined in this graph: 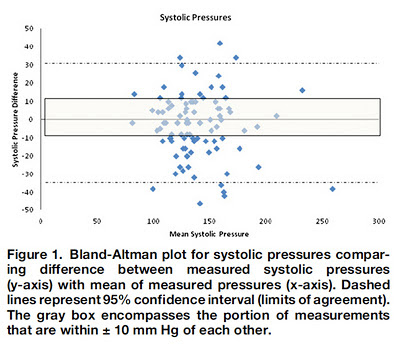 In this graph, the measurements of the RAs are those along the x-axis, while the y-axis depicts the amount that the paramedics' measurement differed from the RAs'. For example, you see the blue dot right above where it says "150" on the x-axis? That dot means that the RA got a SBP of around 145, while the medic got a pressure about 45 points lower, or 100mmHg. And that blue dot sitting right above the 100? Evidently the medic measured a SBP of around 65 mmHg. Seems pretty bad, right?

Well, blood pressures change, they go up and down. Heck, even if the BP in the ED is normal, a lot of literature has found that prehospital hypotension predicts some bad things. (That's four links right there. Go check 'em out right now!)

Okay, how bout the Phase II results, where they measured both arms simultaneously? Here, it seems to spell bad news for the basic skills of the ALS providers. They found that:

Hey fun fact: What percent of patients in the ED have a difference in SBP between their two arms of over 20 mm Hg? That is, if you took simultaneous measurements in both arms, just like they did in part 2 of this study, how often would the SBP be different by 20 points?

Singer and Hollander looked at this issue back in 1996, and found substantial differences when simultaneous arm BPs were measured.  In fact, one could surmise that the differences in blood pressure in the current study, when measured in both arms simultaneously, were actually closer in agreement than would have been predicted.

I applaud the researchers for tackling the prehospital environment, and for addressing basic, but essential, skills. Three things in particular concern me, however, about how this study was conceived and delivered.

1. I'm not sure why the research assistants are deemed "expert," and their readings taken as the gold standard. A true standard would be an intra-arterial pressure (as noted by Singer and Hollander). Short of that, I believe we can only say that the measurements between two people differed. As the methods are worded, they may be taken as somewhat hurtful to the pride of experienced prehospital providers.

2. The premise for the whole study is that these possible errors in BP measurement are material, that they matter. Even the capsule summary by the editors agrees with this premise, stating "Prehospital protocols often call for administering drugs to treat elevated blood pressure, or are otherwise dependent on an adequate blood pressure measurement." First off, I haven't heard of any protocols that call for lowering blood pressure, and it sounds like a bad issue for EMS to wade into.

3. I agree with the editors on one point - we need "adequate" BP measurements, meaning it is good enough for the purpose for which it is used. I don't need to know if a SBP is 150 or  180 before I give a NTG tab, 'cause either is fine. That's an acceptable amount of error for me, in that context. Now, if the patient is pale as heck, sweating, and the SBP is 95 mmHg, I just got a whole lot more interested in accurate measurement of the BP, and I may even take it myself. I expect that most paramedics feel the same way!
Posted by Brooks Walsh at 7:28 PM 3 comments