I want to talk about a new study that looks at heart attacks in younger firefighters, so no jokes or funny picture today. It’s hard to come up with a humorous spin for a graph like this:

The chart above comes from the 2012 USFA report of firefighter fatalities, and it’s shocking. Over half the fatalities in that year had nothing to do with burns, entrapment, falls from ladders, or other traumatic dangers. Instead, MI and stroke, in general, were the biggest danger firefighters faced.
Now, this is partly a function of age, but 15% of the deaths from MI were in firefighters younger than 45 years old. A recent study focused on this group, and found some surprising results.
The Study
The authors of Sudden Cardiac Death Among Firefighters ≤45 Years of Age in the United States wanted to take a closer look at these younger firefighters who died of cardiac causes, and see if there were any risk factors that could explain those deaths.

To do this, they used the database maintained by NIOSH (http://www.cdc.gov/niosh/fire/) to find all cases of firefighters < 45 years of age who had a sudden cardiac death. They looked at the period from 1996 to 2012, and examined autopsies and other reports.
They then selected a bunch of age-matched, healthy, “occupationally active” control firefighters to compare them to. Additionally, they looked at noncardiac traumatic fatalities (deaths due to blunt trauma, burns, or asphyxiation) to serve as a second comparison group.

A few results stand out:
At first glance, it looks like these firefighters had much worse health than the general public. But maybe this is due to the unique stresses of the job. For example, disruption of normal sleep patterns could encourage sleep apnea, leading to hypertension and obesity.

So in order to clarify the issue, they compared the FFs who had sudden cardiac death with the people most like them - other firefighters! 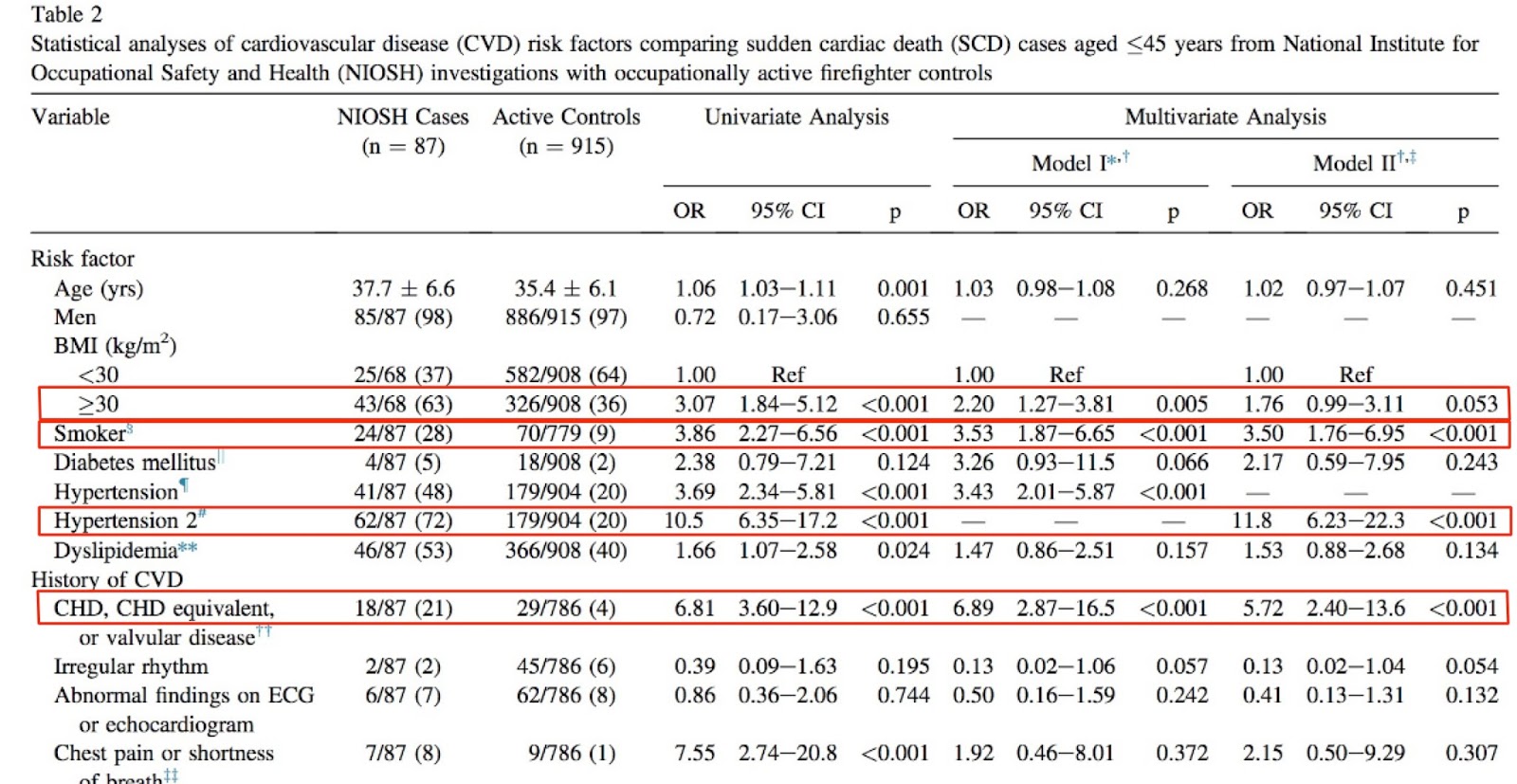 Obesity, smoking, and hypertension were significant predictors of cardiac death while at work. Not unexpectedly, a history of cardiac problems was a huge risk factor as well.

3. Compared with FFs who had a traumatic death
When they then compared the FFs who died from sudden cardiac death to those that had a traumatic death, they found significant difference in both age, and in the size of their hearts. FFs who suffered a cardiac death had higher rates of cardiomegaly, or enlarged hearts, suggesting that they had had longstanding problems with hypertension or obesity (or both).

So what do we do with these results?
First off, prevention (i.e. lifestyle) trumps everything. Quitting smoking, keeping a healthy weight, and maintaining a vigorous exercise routine, amongst other things, may have gone a long way towards preventing many of these deaths. Although firefighting presents many unique challenges to staying healthy (e.g. schedules that disrupt sleep patterns, exposure to heat stress), the comparisons to healthy FFs, as well as those who died from trauma, show that smoking and hypertension play a huge role in raising the risk of cardiac death.

Second, we need to prepare for cardiac arrest in firefighters. The unique nature of the fireground, as well as the obstacles that the clothing and equipment present, mean that departments need to practice their response to a "fallen" firefighter, aiming to start CPR and assess for a shockable rhythm as soon as possible. This requires special procedures, teamwork and practice. Watch these guys from Hilton Head FD run through a drill.


Be safe, and take care of your heart!

Can you give adenosine to a patient with WPW?

Maybe you can answer the question in the title completely and confidently. If so, feel free to skip this post, and go on to some more entertaining corner of the web. However, it seems to me that many emergency providers are unsure about how to approach a confusing issue with adenosine:

Can (or should) you give adenosine to a patient with known or suspected WPW?

Spoiler: The answer to this questions is 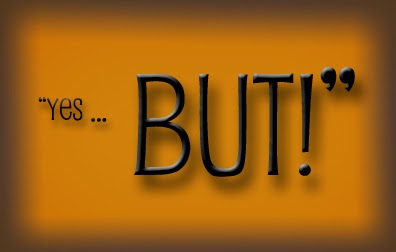 More specifically: One recent case that was treated in the field illustrates principle #1. Fortunately, no local medics have provided us with a demonstration of principle #2!

(As always - Follow your local protocols for WPW and arrhythmias!)

Can you give adenosine to a patient with WPW?
Case report:
This is best illustrated with a case! Paramedic Harvey had a patient with palpitations, tachycardia, and a good BP, and she obtained the following ECG.

A narrow-complex, regular tachycardia in a stable patient? Looks like an SVT!  Medic Harvey decided, appropriately, to bust out the adenosine.

A rapid bolus of 6 mg broke the tachycardia, and restored NSR on the monitor, but the follow-up 12-lead looked a little odd:

A few minutes later a second post-conversion ECG was obtained.

It was at this point that the patient told Heather


"I probably should have told you that I have WPW."


Wait, what?!
Oooooo.... Isn't WPW supposed to be a dangerous rhythm, where you can send the the patient into VF just by thinking about adenosine? Holy cow, did the medic just get lucky, or what?

Brief Review of WPW
Let me go over the pathophysiology briefly.
(For a fuller description, check out a great new e-book by Ken Grauer, entitled ACLS - 2013 - ePub, for more education on WPW and other topics in ECG interpretation and ACLS.)

There are 2 common causes of a regular narrow-complex tachycardia, or SVT.
When an episode of AVRT (aka SVT) is triggered, however, the QRS will usually be narrow, and the delta wave will disappear (as seen in Panel A below). As noted in Panel B, however, in a rare minority of patients the circuit of conduction will be "backwards," and produce a wide QRS.

So, there are some important differences between the two main causes of SVT (AVNRT and AVRT). It's important to emphasize, though, that...

AVNRT and AVRT have 3 important things in common:
In AVNRT, adenosine effectively "cuts" all electrical connections between the atria and ventricles (temporarily!). In AVRT/WPW, however, the bypass tract is unaffected by the drug, and is still capable of conducting electrical signals to the ventricles. This could potentially lead to sinus impulses being conducted anterograde down the AP, producing wide, "aberrant," QRS complexes, but at a controlled rate (i.e. 60-100 bpm).

WPW with AF can be lethal if treated with adenosine
This is entirely different when the patient has WPW and atrial fibrillation. Remember that, in AF, the atria are firing off at 300 - 400 times a minute, not the controlled rate of 60-100 that the SA node generates.

So, if these all of these electrical impulses are transmitted to the ventricles through the bypass tract, the myocardium will freak out. Like this.


WPW without AF is safe to treat with adenosine
We probably don't need to worry*, however, about giving adenosine in patients with WPW, but without AF. There's a few reasons why.

1) First off all, about a third of the SVTs that you have given adenosine to in the past were actually caused by AVRT/WPW, just based on the epidemiology. Since practically none of these developed VF (right?), this is apparently a very safe practice.

2) Second, there was a concern in the past that a certain percentage of wide-complex tachycardia were actually WPW with antidromic conduction, and so the advice was to avoid adenosine. The rationale was that since the bypass tract was capable of retrograde conduction, shutting down the AV node could "expose" the ventricles to potentially unregulated pacing. However studies such as this one have convinced a number of people, including the AHA, that adenosine is pretty safe in anyone with a (regular!) wide-complex tachycardia.

3) Third, many cardiology experts believe that adenosine is safe in regular WCTs. The authors of a 1991 study found it to be quite safe in this setting, and concluded that


"Adenosine may cause acceleration of preexcited atrial arrhythmias, but these effects are transient and should not discourage the use of adenosine as a diagnostic agent in broad complex, regular tachycardias of uncertain origin."

Dr. Stephen Smith, of Dr Smith's ECG Blog fame, believes that we don't even need clinical evidence to prove that adenosine is safe in regular tachycardias, wide or narrow, in a person with a history of WPW. A fundamental understanding of cardiac physiology is enough to sh0w this:


"Anyone who knows what AVRT is, and what it is that electrical circuits do, knows that it is safe to give adenosine. If you ask an electrophysiologist for an article on this, they will say 'There are no articles, because this is so obvious that it needs no proof.'

[A]denosine is safe in VT. One need not prove that it is safe in AVRT ."


The Bottom Line
So it turns out that adenosine was quite safe with Harvey's patient, as well as effective. This probably wasn't a fluke!

Although many medics have been taught that Wolff-Parkinson-White (WPW) and adenosine are a dangerous combination, this isn't often the case. On the contrary - it seems likely that medics and physicians have frequently given adenosine to patients with undiagnosed WPW, without apparent ill effects.

Furthermore, the recent emphasis on giving adenosine for regular wide-complex tachycardias of uncertain etiology makes it even more likely that YOU will give adenosine to someone with undiagnosed WPW. A small number of those WCTs represent WPW with antidromic conduction, but adenosine administration has not been documented to cause any problems to date.

So, follow your local protocols for arrhythmias and WPW, but keep in mind the available evidence, as well as expert opinion, suggests that adenosine is safe in most cases.
__________________________________
* Okay, there are a few, totally theoretic, reasons to worry about giving adenosine to patients with WPW. I mention these only out of a sense of completeness.

First of all, adenosine is not totally benign, and it has been shown to induce atrial fibrillation in a number of case reports. Although the half-life is fairly short, it's conceivable that adenosine could first trigger AF in a patient with a history of WPW, and that the AF could then immediately degenerate into VF. One case report describes how a young woman with SVT developed AF after performing a Valsalva maneuver. Adenosine was then given, and the rhythm degenerated into a pulseless irregular WCT. Cardioversion restored a pulse and sinus conduction.

Second, although there are no case reports that I know of have shown an antidromic WPW tachycardia deteriorating after adenosine administration, this is a rare rhythm, and even a moderate relative risk of adverse effects from adenosine would produce a small absolute number of complications. For example, the study by Maril (that demonstrated the safety of using adenosine in WCTs) only enrolled 2 patients with a history of WPW. One of those patients was determined to have been having a ventricular (non-accessory pathway dependent-) rhythm upon enrollment. It's hard to determine the absolute safety of a drug for such a rare rhythm.

Nonetheless, even a "worst-case scenario" suggests that an adverse event would be very rare.
Posted by Brooks Walsh at 7:08 PM 12 comments