STEMI called from the field - or is it?

As I have remarked before, the computer interpretation of the ECG can only go so far. Occasionally, it mistakes a benign, common finding (e.g. early repolarization) for a STEMI. Other times, it misses an atypical form of a STEMI.

And other times, the computer interpretation has the potential to mislead the clinician in a dangerous direction...

The patient
A mid-thirties male with a history of hypertension had an acute onset of chest pain while at rest. It radiated to his back, and was constant. It was non-pleuritic, constant, and had no associated dyspnea. Interestingly, he had just taken a ever-the-counter "sexual enhancement" pill (such drugs occasionally contain potent - and illegally added - active ingredients).

EMS found him to be bradycardic, and profoundly hypertensive, with a SBP of 230 mm Hg. His ECG was obtained:

Based on the symptoms and the ECG, along with the computer interpretation, EMS alerted the ED that they were bringing in a cath-lab candidate.

ED evaluation
The ED physician met EMS at the door, and called for cath-lab activation immediately. The patient was clearly in severe pain (he would eventually receive a total of 65 mg of morphine in the ED), with waves of sweat rolling off his face and chest. In addition to the severe chest pain, he also described numbness and weakness in his left leg, despite moving it as he writhed in pain on the stretcher.

An ECG was obtained in the ED: 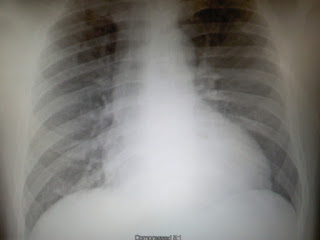 The ED physician had a brief conversation with the interventional cardiologist, who asked that the patient be started on the anti-platelet drug prasugrel while he started speeding on his way to the hospital at warp factor 9.  He had viewed an image of the EMS ECG on his smartphone, and thought that a diagnosis of STEMI was likely as well.


Question
Now, you might suspect this patient did not end up having a STEMI, or else why would I post the case?

Where, then, did the patient end up? Cath lab? ICU? "Other?"

Subsequent course
The patient's appearance was "sicker than the ECG," and suggested an alternate diagnosis. An echocardiogram suggested widening of the aortic root. An emergent CT angiogram of the chest was performed before the cath lab was ready. 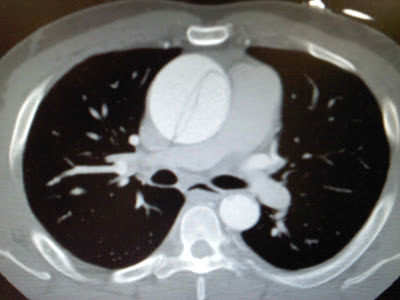 The diagnosis of a type A aortic dissection, extending from the carotid arteries down to the left iliac, was made based on the CT.

Labetalol and nitroprusside were started to control his blood pressure, and the patient was taken to the OR by cardiothoracic surgery.

So, what about the ECG and the "STEMI?"
There is no prior ECG available for comparison, but the ST and T wave abnormalities found on the EMS tracing were stable during the initial hospital course. This suggests that there was no active cardiac ischemia.

Can we use the ECG to diagnose aortic dissection?
Probably not. The diagnostic standard will remain the CT scan, given the excellent visualization.

But are there some ECG findings that could suggest aortic dissection? A recent study provides some answers.

A 2010 study looked at 159 patients with a diagnosis of dissection, and classified the ECGs they found in various ways. Most importantly, they looked at both acute and chronic changes. Just as seen in our patient, LVH due to long-standing hypertension was fairly common, around 10%. We would expect this ECG finding to be chronic, however, and evident on prior ECGs. Curiously, this patient also had sinus bradycardia, which was seen in 11.3% of the study patients. It isn't clear what this is caused by.

What about the 8.2% of patients that had acute ST elevation? How do we avoid sending these patients to the cath lab, or giving them heparin or other anticoagulants?

First off, aortic dissection is rare, and ST elevation is overwhelmingly more likely to be due to a "true STEMI" than a dissection. Second, a dissection will typically have an abrupt onset, with "ripping" pain radiating through to the back. Since a dissection can propagate up the carotid or vertebral arteries, you can find stroke symptoms along with the chest pain. Similarly, as the dissection can extend into other arteries, there may be ischemia of the arms or legs, along with pulse deficits.

Third, dissection will infrequently cause ST segment elevation due to occlusion of a coronary artery as the dissecting layer spreads towards the aortic root.  The right coronary artery is usually taught as being the one most commonly affected, and the study supports this; over half of the patients with ST elevation had those elevations in the inferior region, supplied by the right coronary. Unfortunately, a number of other patients had left main coronary occlusions, and the ECG findings were much more variable with those.

The Bottom Line
It isn't always a straight-forward STEMI, even if the computer is telling you so!