Why paramedics need to read EKGs, and not just read interpretations - Part II

The interpretation software in modern ECG machines is pretty sophisticated, and often unfairly maligned. However, interpreting signs of ischemia on the ECG relies not only on so-many millimeters of elevation in whichever lead, but also on the appreciation of the subtle changes in morphology of ST and T segments, as well as clinical context. There is a definite role for software in EMS cardiology, but there is also a requirement that an educated prehospital provider interpret it as well.

The "Paramedics need to read EKGs" series will highlight the occasional "air ball" that the machines make, especially when there is an interesting, and relevant, clinical context. See Part I for the first in the series.

The ECGs:
Examine the 2 ECGs here, and determine who went to the cath lab, and who was "fixed" in room 4 in the ED. To make this simple, both were middle-aged males with chest pressure starting about 1 hour before calling EMS.

The computer seems so darn certain about patient #2, but gets all insecure about committing on patient #1. Discussion just below.

Discussion:
Patient #1 was brought into the Connecticut hospital that "rhymes with ale" by my friend Josh up at the New Haven AMR station. Not content with the computer's waffling, he called it in as a STEMI alert, despite the computer's lack of support!! 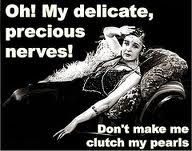 Well, good call. Turns out there was a proximal LAD occlusion, and calling the alert in the field shaved off a good chunk of time. 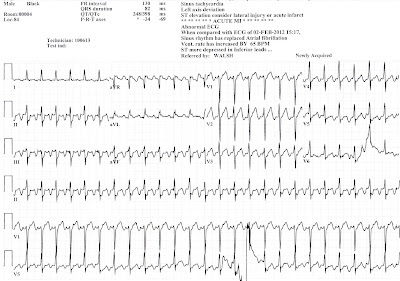 We noted that his pressure was low-ish (around 100 systolic) when he hit the door. ALS had given him a fluid bolus (Thanks Jack!), so we tried another 500 ml of NS. Interestingly, the heart rate stayed at 154 the whole time. And then his blood pressure dropped down to the 80s. What to do?

This was atrial flutter. There are a few clues in the ECG and clinical course I gave above.  First, it was a regular narrow-complex tachycardia at a rate of about 150. In fact, the rate was so regular that it didn't change with time or with fluid therapy. As Steven Smith points out, this really suggests atrial flutter. I would suggest that you do not look for flutter waves, but instead follow the rule of thumb:


A narrow-complex tachycardia, with a rate somewhere between 135 and 165, that doesn't vary by more than 2-3 beats/minute, is atrial flutter.

Sinus tachycardia will vary depending on activity, fluid therapy, or even breathing. PSVT will usually be a bit faster. AF and MAT will be irregular.

A couple elements of the history that, while not essential to making the ECG diagnosis, are supportive. He had had a recent episode of atrial fibrillation that was apparently provoked by cocaine use, and had been easily treated with diltiazem. He came in this time after some coke adventures as well, as well as some emotional downturns.

So, instead of diltiazem, he got propofol and 50 joules (synchronized).  His next ECG was this: 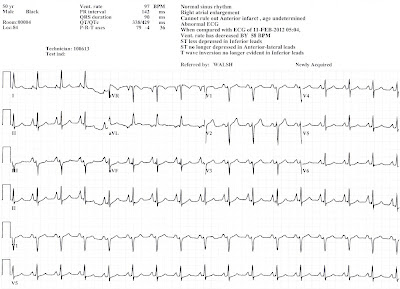 The blood pressure also came up, thankfully. In case you were feeling unsatisfied by the lack of an obvious sawtooth pattern, he had an episode the next day of 4:1 atrial flutter.


Bottom line:
You need to read the ECG. While it is prudent to consider the computer interpretation, it is a sign of true wisdom to judge the interpretation against your own reading. One small, interesting study highlights this element.

In one study, medical residents, both emergency and internal medicine, were shown this ECG. 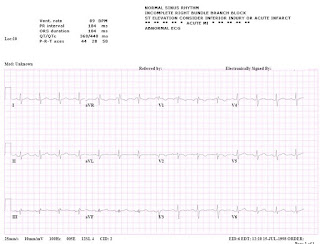 (The actual patient who had this ECG was sent to the cath lab from the ED, and had the computer interpretation shown. She had clean arteries, and was determined to have pericarditis.)

Some of the ECGs had no computer interpretation attached, while others had an  ** ** ACUTE MI  ** ** alert attached. The residents who were given the ECG with the ** MI ** interpretation were more likely to send the patient to the cath lab. They conclude that:


The presence of CI reading affected the aggressiveness of the recommended action, even though this was not reflected in the interpretation of the ECG. In other words, the computer reading did not affect the residents’ ECG interpretation; it affected what the residents believed they would do about the ECG reading.

So, the computer interpretation will affect your interpretation - anticipate this, and incorporate this into your own thinking. Don't discard the information, but don't let it run roughshod over your judgment.

When in doubt, call med control to discuss the context, and we'll meet you in room 5!
Posted by Brooks Walsh at 12:33 PM 9 comments