Why paramedics need to read EKGs, and not just read interpretations.

Two patients, 2 EKGs, and 2 very different stories! Both these patients came into the Bridgeport ED, 1 of them by EMS. One of them went to the cath lab, while the other got some tests and a sandwich.
So, here's the EKG for pt #1, a 40 y.o. male who was complaining of some brief, transient, and sharp chest pains: 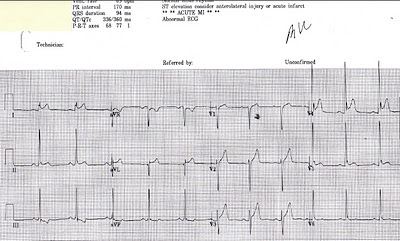 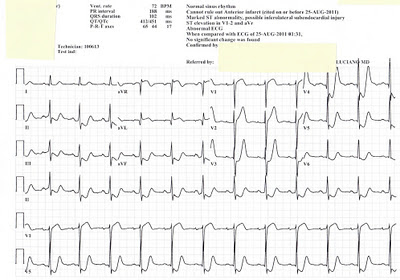 
One of the prominent roles for EMS is in identifying the ST-elevation myocardial infarction. The basic idea is simple ("time is myocardium"), but trying to decrease the time from symptom onset to balloon inflation is pretty complex, and involves multiple decisions, actions, and environments.

Now, the role for EMS is seemingly straightforward - give the aspirin, get an EKG, and call up the ED early if you have a potential cath lab activation. Heck, the protocol seems fairly black and white. 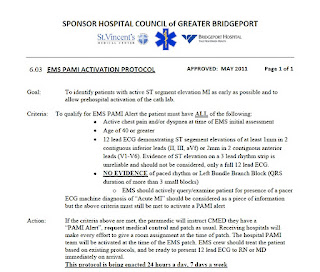 But our patients were not put on Earth to follow the protocol, were they?

Now, pt #1 would seem like an easy cath lab activation, but a close look at the ECG suggest benign early repolarization, or perhaps pericarditis, as the most likely culprit. He had a mess o' ECGs and troponins over the next few hours, and nothing came up funky. He appreciated the sandwich!

Pt #2 had the not-so-helpful computer interpretation; "Cannot rule out Anterior infarct." Logically, you can put that on every ECG you record, since you rule out an MI with sequential troponins, over many hours! But despite the patient's intoxication, this ECG is actually classic for a bad problem, an occlusion in the proximal LAD. When we got this ECG right after he rolled into room 5, I immediately activated the cath lab. The interventionalist found a complete occlusion of the LAD just proximal to the first diagonal.
If you take another look at EKG #2, there are impressive ST-segment depressions in multiple leads, and multiple regions. Up until now, the conventional wisdom had been that this was an NSTEMI, and did not require emergent intervention.

Research over the past 10 years has changed our perspective, however. The key is in aVR, the "forgotten lead." The definite ST-segment elevation in that lead suggests an occlusion of the proximal LAD, perhaps even the left main coronary artery. If you look at the picture above, you see that the Left Main segment is responsible for >75% of the blood supply to the left ventricle. Widow-maker, indeed.

This isn't in the guidelines - yet. In one recent article, a group of cardiologists and emergency physicians suggested additions to the currently accepted cath-lab activation criteria. 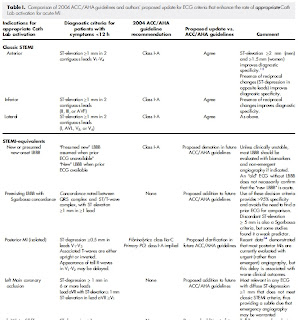 Let's focus in on that last one...

So, this is all proposed stuff for now - what do you do tomorrow when you're bringing in a guy with this EKG?
Well, follow the rest of the SHCGB guidelines - ASA, IV, O2, monitor, and grab some more ECGs during transport, especially if the symptoms change. Talk to triage about bring this this patient to room 5; they may not end up going to the cath lab, but I would prefer to see that patient sooner than later!
Posted by Brooks Walsh at 11:51 AM 20 comments