Fever - does EMS need to treat it?

Treating a kid with a fever seems like a no-brainer. It almost doesn’t seem to need any further justification - a fever is bad, and medicine to treat the fever is good. It’s right up there with mom and apple pie!

It may appear like we're always taking drugs (e.g. atropine, furosemide) and devices (MAST pants, pediatric intubation) away from EMS,   So, it seems pretty nifty to actually add a drug to the EMS formulary.

And why not? The medicines (Tylenol and ibuprofen) are relatively safe (even zombie moms are allowed to buy it for their babies), EMS can start the anti-fever therapy quickly, and we can prevent….  something.

Wait a minute, what are we actually treating?  And why is treating a fever so darn important that EMS should do it?

1. There is no agreement on when to "treat a fever."
Tylenol and ibuprofen are used to reduce fever, and to treat discomfort, and are near-universal therapies for kids and adults.

Treating mild discomfort is a great idea, since not all pain needs morphine. But protocols, in general, only mention a number (temperature) as a trigger for antipyretic use, and most protocols can’t even agree on which number that should be. You can find examples of fever "triggers" for antipyretic use at 100°, 100.2°, 100.4°, or even 101.5°.

For example, check out the New Hampshire state protocols: 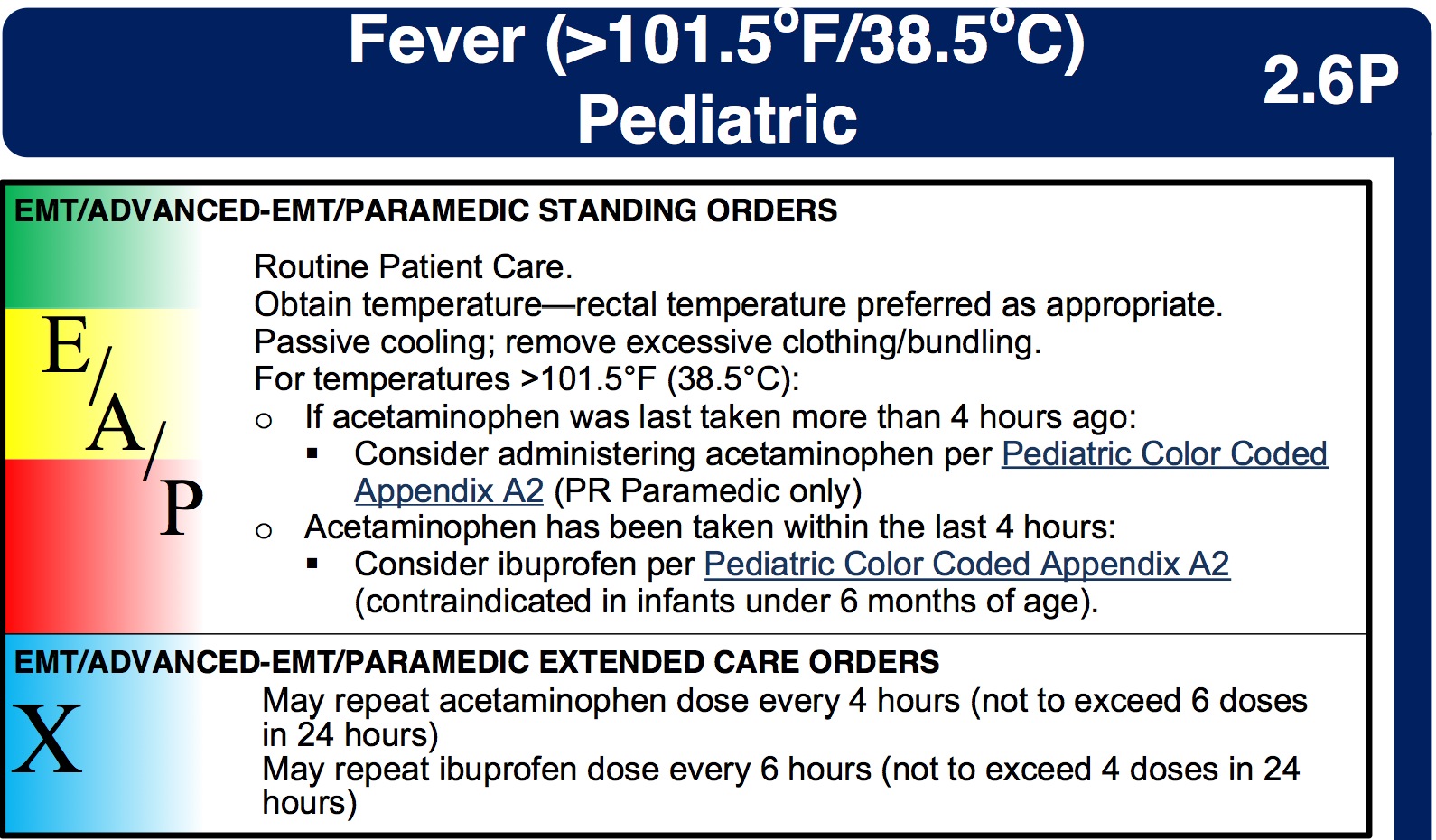 It turns out there’s a good reason why there is no agreement on what temperature "needs" APAP - nobody knows!

And not only is there no evidence saying what temperature elevation needs antipyretic therapy...

2. Fever isn’t dangerous!
While having a fever is unpleasant, there is no evidence that it is harmful. In fact, most experts agree that damage can’t occur until the temperature has been over 106° for a while, which is almost unheard of for an infectious cause.

(Hyperthermia - as in heat stroke - is a entirely different matter, and brain damage can occur quickly, even below 106°. But no one talks about giving Tylenol to a kid that’s been locked up in a car during summer.)

The American Academy of Pediatrics makes it pretty clear

There is no evidence that reducing fever reduces morbidity or mortality from a febrile illness.

Yeah, we should treat pneumonia or meningitis with antibiotics (or heatstroke with ice), but there is no benefit to Tylenol besides feeling a little better.


3. It won’t stop a febrile seizure, or keep it from happening again.
Yes, febrile seizures are often unsettling to parents, but they are essentially harmless. Per the experts:


There is a theoretical risk of a child dying during a simple febrile seizure as a result of documented injury, aspiration, or cardiac arrhythmia, but to the committee's knowledge, it has never been reported.

But OK, they aren't, like, medically bad, sure. But why not quickly treat the fever in a kid who just seized, or who has a history of febrile seizures and just spiked a temp? Well, a number of studies have been done on the subject, and they all say the same thing - aggressive use of Tylenol or Advil does nothing to prevent the next febrile seizure. Phenobarbital or valium do prevent them, but they have significant side effects.

As the AAP guideline on febrile seizures notes that (my emphasis):


In situations in which parental anxiety associated with febrile seizures is severe, intermittent oral diazepam at the onset of febrile illness may be effective in preventing recurrence.

The paramedic’s job should be to reassure (when appropriate) the parents, and treat any mild discomfort associate with a fever. Wrestling a kid to give them Tylenol “to get their fever down” isn’t worth it, and likely doesn’t do much to help their mild discomfort.

I'm also not sure how much the wrestling helps  treat the "severe parental anxiety!"

4. In adults with septic shock and fever, antipyretics could increase mortality
A recent issue of Chest (a journal for pulmonary/critical-care physicians) featured a spirited debate on whether septic patients with a fever should be cooled.

The only point on which everyone agreed was that antipyretics like Tylenol or ibuprofen weren’t useful, and could in fact make the situation worse. As the "pro-cooling" team in the debate conceded,


“Little evidence-based support exists for use of antipyretic medications to improve fever-associated morbidity and/or mortality.”


5. It may promote “fever phobia” in parents and medical providers.
By carrying the drug, and promoting its early use, EMS may play a role in driving "fever phobia." This is the name for the belief that many parents (and far too many doctors and nurses!) have, that fevers are very dangerous.

As the expert pediatricians at the AAP put it, too many doctors and nurses worry about fever causing seizures, brain damage, or death. They then pass on these irrational concerns to the public. As they put it:


It is argued that by creating undue concern over these presumed risks of fever, for which there is no clearly established relationship, physicians are promoting an exaggerated desire in parents to achieve normothermia by aggressively treating fever in their children.

As a consequence, our medical offices, emergency departments, and EMS systems get many calls for a "kid with a fever," who doesn't otherwise look sick, wasting time and money, sometimes prompting unnecessary tests, and in general causing a whole bunch of bother.

The Bottom line
Giving Tylenol or Motrin, in accordance with your protocols, is fine. These are very safe drugs, and they do well at treating small aches and discomforts. But keep a realistic view of what you are using them for. And try to avoid spreading any medical myths!